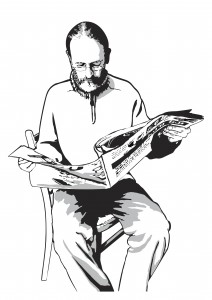 Now before you judge me on this post, I am not against the principles of the Big Issue as a means to help the more disadvantaged in our local communities, but more about what I see and read about the whole issue of the Big Issue these days.

I’ll start with some history since the newspaper was launched in 1991 so has been going for over 20 years, much longer than many other enterprises, so the business model must be valid and sustainable. It was designed to be sold by the homeless and long-term unemployed where they buy copies for a price and then sell on to the general public for around double the cost thereby making a living and not begging as these were the original target sales force.

The articles are well written, and by many popular figures such as Bono, with a circulation of around 100,000 copies a week being sold! So what is the source of my grumpiness regarding the Big Issue of which I have two main complaints?

Where I live, we have a central shopping mall, of sorts, which was converted from an old church and is very popular with shoppers. You can walk through to the library and there are a whole lot of different stores which cater for most people’s needs so this is the zone targeted by the Big Issue vendors.

I say vendors as it appears that from the little old lady who sold copies every day, and was the only vendor in the High Street, we now seem to have inherited a whole family of vendors. There are now three Middle Eastern looking individuals (2 male and 2 female) targeting you with copies of the Big Issue which seems to go against the way the system is set up as they say “Vendors undergo an induction process and sign up to a code of conduct. They are allocated a pitch and issued with a number of free copies of the magazine”

We have one at the High Street entrance, one at the rear entrance and one across the road outside Boots as this is the centre of shopping and everybody has footfall around here especially on Saturdays! Only one of them, at a time, is wearing the Big Issue vest, but they all usually have a Starbucks coffee with them meaning that, at £3 a pop, their profits are seemingly going into Starbucks’s coffers! They can often be seen together at lunchtime munching on their Waitrose sandwiches and free coffees!

And I have noticed that as people hand over the money, they actually ask, “Do you really want a copy or not?” so many people give them cash without taking the newspaper so is this not begging by another method or, at worst, extortion by veiled threat? I was a regular buyer, but now am loathe giving them money as I believe they are not as was originally intended!

My second concern relates to some newspaper articles, albeit mainly in the Daily Mail I must add, that seem to say that people are abusing the Big Issue system to gain a much valued UK NI number by posing as sellers to gain the number and then vanishing into the UK benefits system!

It also appears from reports in the Daily Telegraph that the worst offenders are the latest batch of immigrants to the UK from Romania, Roma gypsies, who are exploiting the self-employed status they get from being a Big Issue vendor and that allows them to claim housing benefit and working tax credit along with everything this entails. There was a recent BBC programme about this as well although there was much talk of their poverty and treatment in their native country and their need to come here to avoid persecution. There was little substance in the radio programme although some councils, including Manchester, are investigating abuses associated with the status of vendors and their rights to entry into the benefit system.

Anyway, got that off my chest and it might upset a few people for which I apologise, but I put my thoughts out there for comment! Do you get badgered by vendors or have any views one way or the other on this whole Big Issue situation?