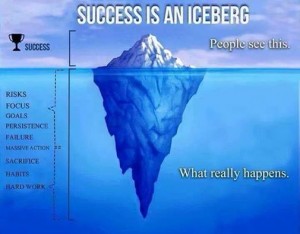 I wrote previously about Internet Sites Are Like Swans and the same analogy applies to successful people as all most people see are their successes and do not always realise that there have been many failures in their past.

The analogy of the iceberg where the majority is never seen can so apply to businesses and businessmen!

We all know that magical quote from Thomas Edison on being asked as a successful inventor if the light bulb after having failed repeatedly to design one that worked.

Look at the effort that he had put in to get to his point of success!

And we all know Mark Zuckerberg from his huge success as founder of Facebook and we’ve seen the huge amount of money he’s made from its recent launch on the US stock market. But did you know he had two previous attempts called ZuckNet and FaceMash that were unsuccessful before he made his breakthrough, and his fortune, from the phenomenon that is Facebook.

As you can see in the graphic, there are a number of factors that no one sees which contribute to your ultimate success including failure as mentioned above. We all know that when you see an iceberg, you only see about a ninth of the actual size as the majority is under the water line.

Similarly with a successful business venture, most of what has made it successful is not seen as it is always behind the scenes or has been part of a previous business failure by the person. Most successful people, Donald Trump and Richard Branson included, have had a series of minor, or major failures in their business lives, but did not let that stop them from keeping going forward to become the success they are nowadays.

All successful people have to measure the risks of their business venture and focus on their ultimate goals to make it happen. They will persist with the exercise even through failure and will make major sacrifices to ensure that their dreams are realised.

Hard work will become a habit until they are finally reach the pinnacle of their field and are seen as being successful and they can then be like an iceberg, floating serenely around the corporate ocean with only the good bits showing knowing full well the effort that they have put in to make it look so easy!

I think this sort of graphic covers any sort of venture either business or pleasure to be truthful as even relationships that seem well suited have taken time and effort to achieve!

Do you see yourself as the next new iceberg? I’d love to know!

How to avoid the “shiny object” syndrome!